Andros Sand is the bastard son of the now deceased Lady Senelle Vaith and Anders Sand. He serves House Martell as a diplomatic envoy.

Like most children of the sands, Andros grew up in the Water Gardens of Dorne along with royalty and bastards both - including his cousins Mallor Sand and Sarella Martell. His father grew weary of having such a wayward son in his presence, so Andros was fostered with his mother's house at the age of twelve.

Andros found learning boring, for the most part, preferring to drink and ride horses with Vaith soldiers and Lord Marlon Vaith's eldest son, Ayrmidon Vaith. As Andros heard more and more of the wonders of the outside world, he grew restless... and yearned for adventure.

Along with many soldiers of House Vaith and both Lord Marlon and Ayrmidon, Andros fought and bled on the Plains of Vasyugys for Dorne. Under the command of Lord Martyn Dayne, Andros led the Vaith light cavalry to victory, riding down their foes with the javelin and the spear both.

Andros packed up his things, and left Vaith behind in search of greater excitement. He met up with Mallor Sand after some trouble on the road, and together the two of them traveled to Sunspear.

Once in the Dornish capital, Andros pledged his service and loyalty to the Prince and Princess, and served to train a cohort of warrior women, as fierce in the bedroom as they are on the battlefield.

He looked to the east however, and sought to explore the wonders and delights of Essos for himself. After being appointed as an envoy to House Martell, Andros served in a diplomatic capacity, searching to soldify Dorne's ties with the east.

To this end, he secured a defensive alliance with Tyrosh... and a rather one sided trading agreement.

Having been told to 'represent Dorne' by the princess, Andros saw fit to bed Bellegere Drahar, and did so repeatedly during his stay in her father's manse. He left her behind to journey to Pentos on a diplomatic mission with her brother, Haegon Drahar, and Mallor.

En route, they were ambushed by Andrik Harlaw and his two ships. The ironborn slew Mallor on the deck of the Tyroshi vessel, Summer Storm, and took both Andros and Haegon prisoner. There, he took them to Pentos, their fate to be decided by Taena Haratis. Before she had the chance to execute him, however, Andros managed to escape with her daughter. Together, the duo fled to the manse of Baerro Narratys, one of the main rival families to the Haratis, and took refuge.

Andros wrote to Tyrosh, to Rickard Ryswell, and to Sarella Martell. With fleets promised from two of the three recipients, and en route to Tyrosh, the Pentoshi council was riven with schism... and Andros himself was a supporter of the Narratys faction.

The bastard fought with the Tyroshi fleet as they took over Pentoshi catapult emplacements guarding the mouth of the bay, and was injured.

He was a son of Dorne, and he would fight until it was time to fuck - during the assault on the Summer Storm 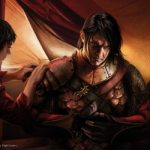