The Sandman Will Keep You Awake - The Loop

Denys Swyft is one of the brothers vying for the title 'Lord of Cornfield'.

Denys Swyft grew up in neglect. Like his brother, Damion, he was not trained in ruling but only the arts of warfare, and any paternal attention was spent on the oldest brother, Jon Swyft, who would later become Lord. Denys prepared himself to become advisor to his brother, serving him with his intelligence.

When Lord Jon and his two sons, Duncan and Jon Junior, died Denys' brother Damion claimed to be the elder and sought to usurp the position of Lord. Denys teamed up with his cousin, Lann Swyft, to prevent this from happening.

Denys adviced his cousin Lord Arthur in the young man's short reign, trying his best to rule Cornfield while Arthur gambled and whored.

After the disappearance of Arthur Swyft, Damion once again sought to become Lord of Cornfield, but Denys was able to stop him. They now sit in an uneasy stalemate, both waiting for a chance to assume Lordship. 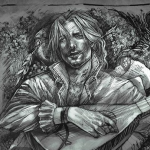