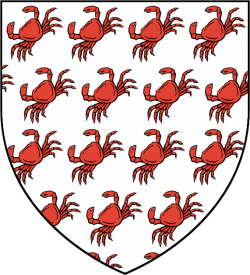 House Celtigar of Claw Isle rules Claw Isle, an island in the narrow sea off the coast of Crackclaw Point. The Celtigars are sworn to Dragonstone within the Crownlands. Their arms depict red crabs strewn on white. Their words do not appear in the books.

Claw Isle is the ancient island seat of House Celtigar in the Crownlands. It lies a few hours sail north from Dragonstone. The people of Crackclaw Point refer to the island as Crab Isle.

During the Dance of the Dragons, Lord Walys Mooton's force to retake Rook's Rest from the greens included men from Claw Isle.

Though Lord Ardrian Celtigar has shown the world a niggardly face, he has never stinted on his own comforts. Claw Isle's castle is reputedly stuffed with Myrish carpets, Volantene glass, gold and silver plate, jeweled cups, magnificent hawks, an axe of Valyrian steel, a horn said to summon krakens from the deep, chests of rubies, and more wines that a man could drink in a hundred years.

House Celtigar is an ancient and proud house, with the blood of old Valyria in its veins. Crispian Celtigar served as master of coin to Aegon the Conqueror. The Celtigars claim dominion over Crackclaw Point, but the inhabitants do not acknowledge their claim. When they surrendered peacefully to Visenya Targaryen during the War of Conquest, the people of Crackclaw were officially freed from pledging fealty to anyone but the Iron Throne. The Celtigars occasionally send men there to collect taxes. If Lord Celtigar sends enough collectors, a few come back to him.

During the Dance of the Dragons, Lord Bartimos Celtigar sat on the black council to Queen Rhaenyra Targaryen.

The Celtigars' castle is rumored to hold fabulous treasures that bear witness to their wealth. Among Lord Ardrian Celtigar's property there are Myrish carpets, Volantene glass, gold and silver plate, jeweled cups, magnificent hawks, a trained sea eagle, an axe of Valyrian steel, chests of rubies, a horn said to summon krakens from under the sea, and many fine wines.

Sided with Harys Baratheon during the Ascent of the Lion.

The Lady of Claw Isle, Daena Celtigar, sent a letter to the Queen in hopes that she could swear fealty to the Last Dragon. Danae excepted and Daena was brought before the court, where she made several treasonous statements regarding The Queen's husband, Damon Lannister, and how Danae should be the only one on the throne. Daena was imprisoned for treason, and later executed by hanging. After hearing about this, Daena's younger sister, Rhaenyra Celtigar, assumed ladyship over the isle.