Lenyl Sand is the natural-born son of Ser Alistar Dayne of High Hermitage. He was raised in High Hermitage and left for Oldtown where he would stay for years before traveling across Westeros. After a while in Kings Landing, Lenyl was invited to the Kingsguard by Lord Aemon Estermont.

Lenyl Sand is the natural-born son of Ser Alistar Dayne. He was treated as a true-born son and raised along-side his younger brother Jaime, and sister Allyria. He spent a lot of time training with his master-at-arms, Quentyn, and was considered around High Hermitage to be an exceptional swordsman. When he was sixteen he left to go to Oldtown where he stayed for 7-years, doing jobs around town and  as a sell-sword around inns. He eventually moved on and traveled the lands, from the Reach, to the Stormlands to the Riverlands, giving help to smallfolk and merchants.

He met a hedge knight named Ser Axell 'the dragon', who named himself that because he had 2 uncles with greyscale which he linked to dragons. Ser Axell joined him on his travels from the Stormlands. They did many things in their travels - fighting outlaws, offering their protection to traveling merchants or people of faith, joining outlaw bands, working in inns, hunting, and more.

After traveling around south, he made it to Blackwater Rush where departed with his long time friend and companion, Ser Axell, and made way for Kings Landing.

When he made it to Kings Landing he managed to sneak into court to witness Antario Wyl's attempt to charm the queen. He helped smallfolk around Kings Landing but he eventually got involved with an incident at an inn and was pushed out of a window by the Innkeep as a result.

Out of anger, he was prepared to kill the innkeep but was quickly forgiving recognizing that the innkeep was a weaker man and instead turned him over to the gold-cloaks.

At the beginning of the sixth era, Lenyl reunited with his younger brother and sister who were in Kings Landing to represent House Dayne of High Hermitage at the Queen's masked ball.

Lenyl fought amongst the Crown's forces on Claw Isle to take the down the rebellious Lord of House Celtigar. He entered the castle along-side the Crown's Hand, Lord Aemon Estermont, and stopped Lord Hardy from killing Myles, who ended up being slain by one of his own men.

Shortly after being knighted by Lord Aemon Estermont, as a reward for his efforts on Claw Isle, Lenyl was offered a place on the Kingsguard by the Hand, which he accepted. 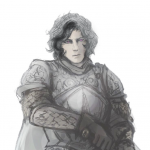