Miklaz is a young captain of the New Ghiscari Lockstep Legions, and fiancee to Ezzara Zo Pahl. He is a trusted advisor to Draqaz Zo Pahl, his soon to be father. 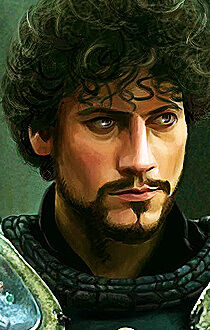 Miklaz was born into a respectable and old - yet not wealthy- family of New Ghis. His parents ran a small slaving business like most of the people of New Ghis, but were not rich enough to own a pyramid. They both died tragically at sea, when the ship they were traveling on to return home on from a venture to Volantis was attacked by pirates and corsairs.

Miklaz was too young to remember any of this or his parents, and was then raised by his uncle, who was is a captain in the Legion. He was taught to fight and command men, and he always expected to follow in his uncle's footsteps. Enrolling in the Legions from as soon as he could, he has risen quickly in the ranks and hopes to rise further in the future.

He is known to be a talented warrior, adept with the spear, and a womanizer of sorts.

Miklaz was promoted to captain in the Ghiscari Iron Legions. He also began a relationship with Ezzara Zo Pahl, of which her father Draqaz at first did not approve of. Ezzara fell in love with him.

Realising the potential of the captain and noticing his status in the Legion, Draqaz allowed the relationship to continue and blossom. Miklaz is now engaged to Ezzara, and their wedding looms.

Miklaz was a newly appointed captain in the Iron legions, and not a choice he would’ve consented to. He considered Miklaz reckless and arrogant, but had so far allowed the romance between the two go unchallenged but for a few words of caution. - Draqaz Zo Pahl on Miklaz