Faith of the Seven

Rhaenys Caron is the sister of Corliss Caron, the Lord of Nightsong. She is currently one of Queen Danae Targaryen's ladies-in-waiting.

Rhaenys is the second child and only daughter of Lord Bryce Caron and his wife, Alys Velaryon.

She was born in 491 AC and is said to resemble her father far more than her mother, despite inheriting from her the typical Valyrian violet eyes.

Compared to her older brother, Rhaenys was a joyful and extroverted child, who enjoyed talking and meeting new people or daydreaming about visiting new places, perhaps due to the sheltered life her mother forced on her. She received a lady education with a focus on music: indeed, Bryce Caron often had his son and daughter play and sing for guests who visited Nightsong.

Rhaenys grew up to be a proper lady, much like her mother, although she still retained her childlike curiosity for everything new from childhood. She is an innocent (sometimes to the point of naivety) and sweet girl, who cares deeply for the well-being of her loved ones, especially her family.

In 499 AC, her father's death scarred her to the point she developed a fear for sailing and travelling by sea.

Her brother sided with Damon Lannister and his forces during the Ascent of the Lion, while her mother and she remained in Nightsong.

Rhaenys leaves Nightsong for the first time, for Corliss' betrothal to Rhaenyra Celtigar. They arrived in Storm's End, where Corliss would participate in the war council summoned by Lord Orys Connington. Rhaenys met Lord Lewys Penrose during her stay thanks to his kitten, Terrence.

Rhaenys arrived and stayed in the Red Keep where she met King Damon and his kitten Creature.

Rhaenys saw her brother's arrival in King's Landing and partecipated at the Queen's Feast. There she met Lord Penrose's sister, Sansa and became friends; Dagon Greyjoy, their cousin Larra Redwyne. She paid her respects to Queen Danae, who invited her to join her and Meredyth Tyrell in the gardens whenever she wanted.

Rhaenys in the days following the Queen Feast discovered the existence of Edric Waters, by reading the letter Varyo Velaryon had sent Alys, and later the unfaithfulness of her father to his wife. She was so shocked by the relation she fainted. She decided to leave for Driftmark to meet Edric, accompanied by Ser Jonothor Selmy. There she got acquaitanted with her uncle Hothor Velaryon and Velaena Waters.

She later attended her brother's wedding to Cassana Connington with her mother.

At some point after the wedding, at her mother's suggestion she left for the Red Keep to ask for Queen Danae's protection and stayed in the Red Keep as her handmaiden even after the Occupation of Nightsong had seen her brother victorious.

Currently a handmaiden to Queen Danae. She attended the Queen's Ball where Ser Alyn Florent tried to ask her to dance, she hesitated but before she could give out an answer, her older brother Corliss spilled wine on him. He then tricked him into wearing her chemise by convincing him that it was his spare shirt. This incident has caused a strain in her relationship with her brother.

Rhaenys spent her days in the Red Keep with her fellow handmaidens, becoming close friends with Ysela Stark. All handmaidens witnessed how the Queen's mood worsened after the King left for the Westerlands and rumours regarding a certain paramour of her husband reached the Red Keep.

Despite not attending the Tourney of Blackhaven in person, the news regarding Durran Dondarrion's death reached the Red Keep, causing Rhaenys to seek out Uthor Dondarrion himself when he stayed at the Keep. Rhaenys negotiated neutrality on House Caron's behalf behind Corliss' back with the Dondarrion, fearing a new war would come to the Stormlands and it would mean the death of her loved ones.

"Rhaenys Caron may have been a Stormlander by birth, but to Danae, she seemed anything but. Quiet, well mannered, almost delicate in nature, she was nothing like the cold and uncaring land that had fostered her. Where her presence might once have been soothing-- a reminder that there were still soft things in a world that seemed to have grown so hard-- now it seemed to fill her with dread." - Danae Targaryen

"Like a little bird, Rhaenys had never seen the world beyond her golden cage." - Sebastion Foote

"Rhaenys is sweet as a nightingale, this is true. Unfortunately her family is anything but."- Alysanne Rogers

"You are your father's child." -Velaena Waters's first impression of Rhaenys 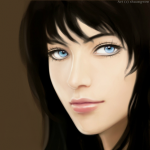