Theodore was Lord Paramount of the Reach during the civil war known as the War of the Split Stag. House Tyrell led by Theodore, lent its support to Lyonel Baratheon over Durran. In order to mend the fractured Reach following the war, Theodore arranged an assortment of betrothals with the former rebel houses and his own kin.

He had three children with his wife- Merianne, Luthor, and Hoster. 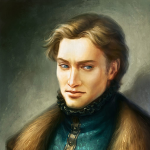